Smart Robots, Conscious Computers, and the Future of Humanity

We are now on the doorstep of a fourth change brought about by two technologies: AI and robotics. Byron Reese’ book “The Fourth Age: Smart Robots, Conscious Computers, and the Future of Humanity” provides extraordinary background information on how we got to this point. Byron leads readers in an examination of how—rather than what—we should think about the topics we’ll soon all be facing: machine consciousness, automation, employment, creative computers, radical life extension, artificial life, AI ethics, the future of warfare, super-intelligence, and the implications of extreme prosperity.

By asking questions like “Are you a machine?” and “Could a computer feel anything?” Reese leads readers through a discussion along the cutting edge in robotics and AI, and, provides a framework by which we can all understand, discuss, and act on the issues of the Fourth Age, and how they’ll transform humanity.

“The Fourth Age” is available in print and electronic formats. Order now via your preferred book-seller, or order directly from Byron for free shipping and an autographed copy. A Message in a Bottle – Byron on Writing

“The best thing to me about writing is that my message goes out into the world, and I have no idea who will see it. It goes to people I could live a hundred lifetimes and never pass on the street.

About every other day, I get a note from someone who read something I wrote, or saw a video I was in, or attended one of my talks, and such great things have come out of them. For instance, I had the great opportunity to work with a museum on an exhibit about the future. A person hearing one of my speeches made an introduction for me, and I ended up as a dinner guest at our then Vice President’s home. On another occasion, something I wrote led to an amazing visit to Mount Athos in Greece where over a thousand monks live in monasteries the same way they did 500 years ago.

One day, I received a phone call from an unknown international number, and it was Mexico’s prior president, Vicente Fox, who had discovered Infinite Progress while browsing the Kindle store. He told me he loved the book and invited me to stay at his home and teach at his presidential library. That was an amazing trip where, among other things, my meager chessplaying skills were compared favorably to Fidel Castro’s by a man who played against him. And so, I keep writing, sending out messages in bottles.” Byron visiting the Simon Petra Monastery on Mount Athos, Greece. Read Byron’s account of his time at the monastery, Accessing the Internet Atop the Holy Mountain. 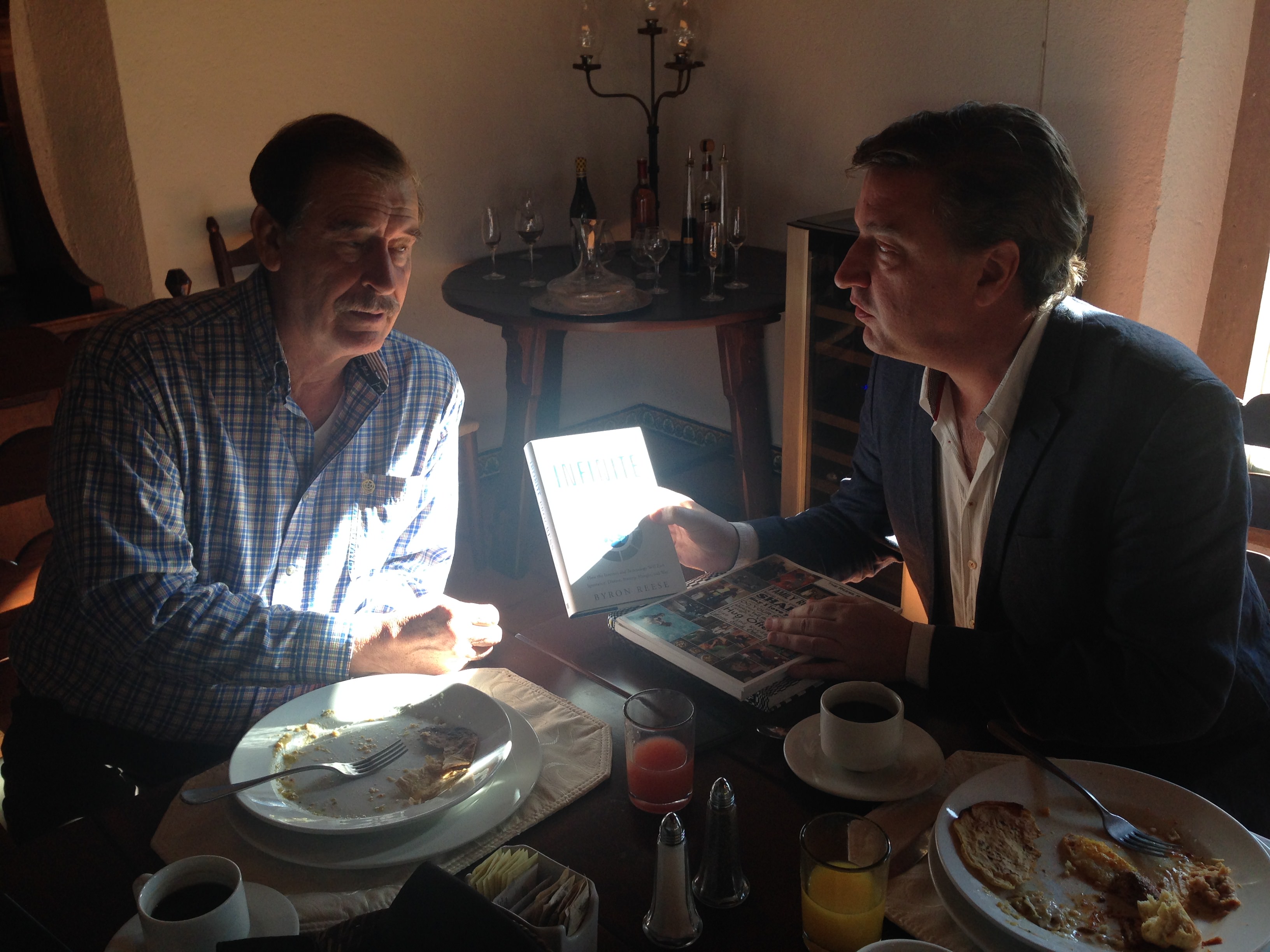 Byron visiting with the former President of Mexico, Vicente Fox.

"How We Will Age Within 20 Years" by Byron Reese

A World of Inspiration

"A World of Inspiration," by Byron Reese

Get in touch or Book a Talk Here

Get in touch with Byron